The Reality of Being an Author

This article from author Kameron Hurley The Cold Publishing Equations: Books Sold + Marketability + Love
couldn't have come at a better time for me. I'm still smarting from St. Martin's Press's rejection of my second novel, The Ones You Left Behind.
Ouch!
I'm thrilled beyond measure that they published my first book, What More Could You Wish For, but they don't want book number two. Why not? Is it a lousy book? I don't think so (of course I don't). Is it a great book? Well...probably not, but it's decent and it's well-written, so I don't think that's the problem. More likely it's my numbers on book number one, which didn't sell well (and if I could make heads or tails of the statements they send me I could maybe tell you how many it actually sold) and that's probably the biggest factor.

Kameron Hurley says: I want to talk about the reality of being a debut author, because nobody actually talked to me about those numbers. What defined success? What should I expect? Was I a failure if I sold fewer than 80,000 copies? Fewer than 20,000? I know selling 100 is bad, but outside that….? 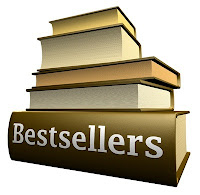 The average book sells 3000 copies in its lifetime (Publishers Weekly, 2006).
Yes. It’s not missing a zero.
Take a breath and read that again.
But wait, there’s more!
The average traditionally published book which sells  3,000 in its entire lifetime in print only sells about 250-300 copies its first year.
That's kind of comforting to me. I was paid a $10,000 advance for my first book and I earned out of that advance before it was even published because they sold the rights to a German publisher who paid more money than my advance. So that was fantastic! And eventually I even got a small royalty check, but the bad news is I didn't earn out through book sales.

And St. Martin's Press is in the business of selling books.
My chances of selling more of book number two probably don't look promising to SMP, even though now I have a (small) audience, so why take a chance?
Discouraging? Yes, of course.
Add to that the fact that my agent isn't quite on board with book number two, although she likes my writing, but she's looking for more revisions. So what now?
I like it the way it is (not that it can't be improved); a quiet story about a woman's personal growth in the face of adversity. And, frankly, I'm a little sick of it after working on it and revising it for three years (not a terribly long time in the world of novel writing). So maybe it's just time to move on.
I've started book number three and am 10,000 words into it. So, (only) about 70,000 words to go.
It's a frustrating and disheartening business, this business of writing novels. I have always known that. It's even more frustrating now, from where I sit, feeling a little like I've failed.
But, my friend Barbara likes to remind me that I have a book that was published by St. Martin's Press, one of the biggest publishers in the world; I have written a second ENTIRE book; I am now working on a third; I can utter the phrase, "my publisher." Where's the failure in that?
After reading Kameron Hurley's article I feel better. I'm not alone here. I'm walking in the footsteps of many other authors - some wildly successful, some not, but most whose books will sell 3000 in their lifetime.
As Kameron Hurley says, the only thing I have control over is the words on the page.
If I quit writing, that failure is on me.
The Ones You Left Behind hasn't sold yet but that doesn't mean it won't. There are other publishers. And maybe it won't sell until I've sold book number three (which doesn't have a title yet).
And that's the sad truth about publishing. The bottom line is, I don't write because I think I will make a lot of money doing it (obviously!), I write because I love to write.
So...onward!

I am totally with Barbara on this!!! Life's too short to look at the glass as half-empty. Revel in the high notes you have already hit...and keep slogging onward!

What More Could You Wish For from St. Martin's Press

READ THE ARCHIVES. CLICK ON THE MONTH BELOW TO SEE WHAT YOU'VE MISSED: